Vaporizers are as distinct as the vapers who use them, and that distinction grows further with different batteries and modifications. Unlike other consumer electronics, multiple battery options for vaporizers don’t just separate themselves on the basis of lifespan. Rather, a specific battery type can directly impact whether or not a vaping device can function given a particular configuration.

As you can easily surmise by now, battery options will be substantially affected by vaping style. For mouth-to-lungers, the choice in power plants is practically limited, but for a good reason. There’s really no point in acquiring the biggest, baddest battery if you’re going to vape mouth-to-lung. The high resistance platform preferred by smokers and nicotine consumers is naturally efficient. You can take long drags on these vaporizers, and it’ll keep running like the Energizer Bunny.

That said, there’s no law against getting a powerful battery for a high resistance system. However, you can’t willy-nilly pick whatever power plant you want as there are functionality and compatibility issues involved with high resistances.

First, in terms of wattage, it’s best to stay within a reasonable range. According to the experts at Vapor Authority, a 30-watt system for high resistance atomizers is more than sufficient. It’s important to stay within researched guidelines as introducing new elements unconventionally can lead to unforeseen consequences. Furthermore, not going too far off the rail in terms of power delivery will ensure a proper balance between flavor and the overall end-user experience.

Second, the high voltage atomizers (or high resistance atomizers) are designed for a specific battery system. Typically, this would be a dual 3.0V/3.7V lithium cells in a series for 6V output. This creates an effective balance between vapor production and throat hit. Some vapers have experimented with using standard 3.0V to 4.2V batteries. However, the best recommendation is to not even waste your time. High resistance platforms using such standard power configurations produce very little to no vapors.

For the ex-smoker that doesn’t want to completely give up on the throat-hit sensation but also wants to enjoy some of the elements of a low resistance vaporizer should have a crack at standard resistance atomizers. These systems generally have an ohm rating between 1.0 and 3.0 ohms, whereas high resistance devices typically start at 3.2 ohms, and move higher from there. Some hobbyists may find that to be too high, so standard atomizers provide a very comfortable middle ground. They are also less finicky with battery type, which is a major plus.

At the other end of the spectrum are hobbyists and non-smokers. For them, high power delivery is an absolute must, since vapor production and intense flavors are direct corollaries. That in turn means low resistance atomizers, or sub-ohm atomizers, which permit free-flowing electrical current. That freedom, though, is not free. Sub-ohm atomizer coils start at a resistance of 0.9 ohms and go as low as 0.01 ohms. These tremendously low resistances require a massive amount of wattage to accommodate them.

Low resistance platforms take up a massive chunk of battery power. Indeed, if the direct-to-lung approach is your go-to style, you can’t ignore the investment in high-powered batteries because they’ll be plenty of it! Furthermore, if the equipment is lagging, you have to chuck it.

When it comes to sub-ohm atomizers, the vaper has to deploy increased reasonable care of their equipment. Such configurations demand a considerable amount of energy compared to their standard resistance counterparts. Thus, quite a few components are at risk for failure unless mitigated through the proper procurement and usage of accessories.

For instance, almost every reputable vaping company and resource warn against low resistance atomizers coupled with small batteries with a maximum capacity of less than 400mAh. This description includes ALL analog-size batteries.

Here’s the reason — low resistance atomizers demand substantially more current outflows from the battery than do the high resistance counterparts. But this is not just a “static difference,” for lack of a better term. Instead, every time the vaper draws from his or her vaporizer, the variance between high and low resistances becomes extremely apparent. If the vaper draws too frequently or too richly, the pressure from the outflow can destroy the internal structure of the battery.

Obviously, that can lead to permanent damage of the battery. Again, this is a more pronounced issue should the battery be internally integrated. Even if there is no damage done, the battery would get drained inordinately quickly, making it not worth your while.

And it’s not just about the integrity of the power plant. A failure in this critical component can snowball into critical failures elsewhere. In response to the risks, many vaporizer manufacturers have included warnings regarding their low resistance products, recommending only protected 18650 style batteries, or Li-MN high drain batteries.

Moving on from batteries, let’s now discuss MODs. This term comes up so often in the vaping community and via online resources, yet it’s probably one of the more misused or misunderstood terms. What makes this even more problematic is that different websites use the term in different ways — thus, there’s no standardization of definition. That’s a major misstep considering how that could lead many newcomers astray.

Fortunately, Jenny Spring made an excellent contribution for Vapor Authority by clarifying a very ambiguous topic. According to Spring, the term MOD is simply an abbreviation for “modified” or “modification.” To the lay person, a MOD sounds like an upgraded vaporizer, and that’s essentially what it is.

Furthermore, there is another term called “APV” that’s being floated around the vaping web. APV stands for advanced personal vaporizer. On the surface, the two terms APV and MOD appear to have different connotations. MOD, as we just mentioned, implies an upgrade. In contrast, APV sounds like an entirely new brand of vaporizer that’s marketed as a standalone product.

Here’s the root of the confusion. As Spring notes, MOD and APV are interchangeable terms. Basically, they are one and the same. But to add even more to the perplexity, there is a product called the “mechanical MOD.” Mechanical MODs are not MODs, and therefore, are not APVs — even though the suffix “mechanical” implies a higher emphasis on science and engineering!

Let’s take a moment to eliminate this misunderstanding altogether. To do that, we need to briefly look into the history of vaping. During the industry’s infancy, electronic cigarettes were shaped very much like their analog counterparts. That design work may have lent immediate familiarity with smokers, but it was murder on functionality.

A cigarette at its most basic form is tobacco rolled up into a tight, cylindrical pattern. The idea here is to minimize the radius of the cigarette since the catalyst is an open flame. In other words, the e-cigarette has to be densely packed in order to maximize the richness of “flavor.” An open flame, however, can take up whatever space it wants.

That concept just doesn’t fly with e-cigarettes. A thin, cylindrical chassis necessarily coerces an even thinner battery. Thus, the power plant of early e-cigarettes were alkaline batteries that you can find at just about any retail location. Because of the lack of real estate, these batteries could only hold up for an hour or two at the most before requiring a recharge or buying a new set of batteries.

Such purchases aren’t exactly cheap, especially if one wants to draw from their e-device on a daily basis. Thus, early innovators sought a feasible solution to this growing problem. Their idea was to swap out the alkaline batteries for large capacity lithium-ion batteries. However, larger capacity also meant greater space requirements. As a result, the vaporizers had to be modified to accommodate the lithium platform.

When the innovation gained popularity, the vaping industry called these new modifications MODs. The term has stuck ever since.

So where does the term APV come from? For the most part, the MOD movement was a grassroots innovation. This was an improvement engineered by vapers for vapers. But quickly, vaporizer manufacturers saw the golden financial opportunity in mass marketing these modifications. They standardized this innovation and labeled it as the advanced personal vaporizer. In truth, this label is far more descriptive and relevant than “MOD” — however, MOD is a legacy term and is unlikely to be eliminated from the vaping lexicon.

Mechanical MODs, on the other hand, describe a dissimilar, almost opposite concept to the APV/MOD. According to Spring, “mechanical MODs do not contain electronics or circuitry of any kind.  A mechanical MOD is simply a casing that holds the battery, and a manual button that then connects to an atomizer of some sort.  The button doesn’t send a signal to the battery releasing power to the atomizer.  Rather, the battery simply completes the connection between the battery and the atomizer, thereby vaporizing the liquid.”

As you would expect, the type of MOD or APV that you use will have a direct impact on the overall vaping experience. In addition, MODs or APVs are catered towards vaping methodology or type of vaper — ie. ex- or current smoker versus hobbyist or non-smoker.

Again, we have to stress that there is no hard and fast rule when it comes to vaping style or equipment usage. However, industry analysts have noted that smokers tend to prefer simpler MODs. These have the advantage of enhanced reliability and overall robustness. There’s also a couple more reasons why smokers prefer this platform.

Primarily, smokers are mouth-to-lung adherents and therefore don’t require the bells and whistles associated with low resistance APVs and MODs that are geared towards direct-lungers. Frankly, if smokers know ahead of time that they won’ t be experimenting with any other drawing process, the upper-tier APVs and MODs are a waste of money for them.

Ardent smokers are also weighing the benefits of enhanced reliability. With less parts being used, higher resistance APVs and MODs have fewer avenues for failure. This isn’t just true for electronic cigarette and vaporizers. Virtually anything that has fewer components will tend to have better reliability and a more robust platform. 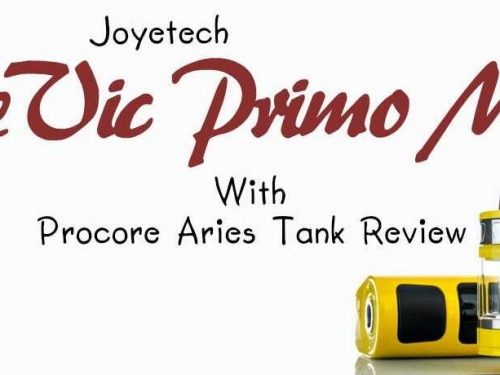