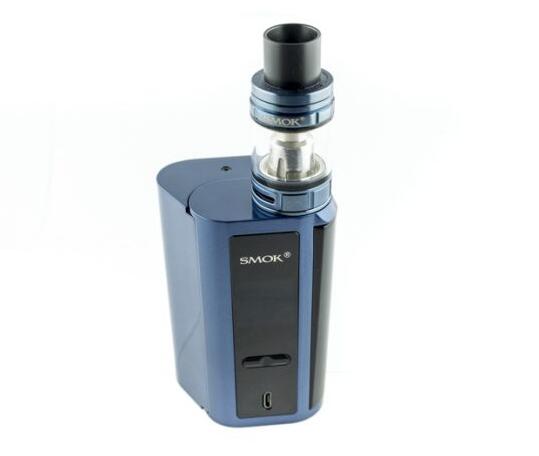 Let’s roadtest the GX 2/4 kit and see how it performs!

The GX2/4 kit comes with all the essentials to start vaping – minus the 18650s. A fold out quick start guide comes with the kit, as well as a warranty card and battery safety warning. You get a choice of two coils, the 0.4 and 0.15 ohm variants in the TFV8 Baby family. The mod comes preassembled in dual-18650 mode, the extra quad battery cover wrapped and packaged underneath. The TFV8 Big Baby tank ships as standard, although without a glass tank replacement or RBA core. There are enough extra o-rings and a spare juice inlet in case you mess something up.

The GX2/4 kits we received are all free of any button rattle. The paint job reminds me of the G320 kit – it’s a powder coating, rather than anodized finish. Hopefully it will hold up better than on some previous SMOK products…

The firing bar spans the length of the mod. It’s a similar design to the bar on the Skyhook RDTA box and the H-Priv. It has a short throw, but lacks a satisfying click or any real spring to it.

Both battery panels hinge into position at the top, and are held in place by a button release on the underside of the mod. As a dual-18650 mod, the GX2/4 is pretty damn slim. It packs two batteries into a form factor about the same width as the iStick Pico. The battery door clicks into place, and the dual-18650 mod fits nicely in the hand. The quad-18650 build is considerably bulkier, as you would expect. It sports a diamond-shaped form factor similar to the Reuleaux RX 200 but with added width and depth. This is a big mod that won’t fit all hands comfortably.

One issue that effected all three samples we received was that the quad-18650 battery door doesn’t sit entirely flush with the mod. There’s a noticeable height difference at the top, and the button release on the underside prevents the RX2/4 from sitting entirely flat.

The GX2/4 kit menu interface will be familiar to many users of SMOK products, as it’s identical in appearance as that used in the Alien, G320, and most recently the QBOX.

The device turns on with 5 clicks to the fire button. When the GX2/4 is on, 5 clicks will lock (and conversely unlock) the device, as will pressing the up and down buttons simultaneously.

Three clicks of the firing button take you to the menu. You can then choose from Mode, Puff, Setting, and Power submenus.
Mode: switch between VW and TC modes, as well as three memory settings.
Under wattage, you can choose from three strength settings – soft, normal, and hard.
Under temperature, you first dial in the desired wattage, then select from Ni, Ti, SS316L wire types.
Finally, you can manually adjust the temperature coefficient resistance of each metal. If you’re unsure about this, it’s best to stick with the default values (the TCR default for SS is 0.00105, suggesting SS304 wire type), but if you want to tweak settings, have a look at Steam Engine’s Wire Wizard calculator, the go-to resource.

Puff: adjust puff settings, as well as a limiter and reset function.

Setting: adjust ohm resistance manually, screen contrast and timeout. This is also where you’ll be able to make firmware updates, as and when they are available.

The OLED screen displays all your vital stats at a glance. Note that battery life is always displayed over two bars, whether you’re using two or four 18650s. Wattage can be adjusted in .1 increments from 6 – 100 watts, and 1 watt increments thereafter. In TC mode, you can cycle between Fahrenheit (moves in 10° steps) and Celsius (5° steps).

You can power off the device either through the Power submenu, or by unlocking the screen and holding down the fire button for five seconds.

For this review, I’m vaping on “SS Californian”, an e-liquid from Belfast-based Titanic Vapour, with a VG/PG mix of 80/20 and nicotine concentration of 3 mg/mL. This one has a straight up fruit salad vibe and comes out beautifully in the TFV8 Big Baby tank.

There’s no denying that the TFV8 Big Baby is a versatile tank. It has a bunch of coils, as well as an RBA core available. I let rip around 60 W on the 0.4 ohm coil. It’s a consistent, if thirsty performer, the TFV8. For more info on the tank, check out Bill’s review of the Baby Beast. The Big Baby adds a bit of heft to the design, fits more juice, and takes the same coils as the Baby Beast. EU customers will receive a modified, 2 mL version of the tank.

The GX2/4 kit offers vapers the convenience of a modular design. Out and about? You might only want to pack two 18650s into the mod. Feeling more stationary? Pop four in there and the GX2/4 is an impressive piece of kit.

Let’s go over some of the pitfalls here. Firstly, if you want to play it absolutely safe, it makes sense to pair or “marry” 18650 batteries. That means you use a set of batteries together, charging and draining them in the same way throughout their lifespan. Although regulated mods have a host of safety features in place, it’s not worth losing face if something goes wrong. Think of it as common sense – and best practice if you use a mechanical mod.

That would mean to use the GX2/4 properly, it would be best to have 18650s in paired sets of two and four. It would also be wise to pair the same type of battery together. It’s not as simple as just plugging in another two batteries when you get home. I tried it – no explosions, just an uneven discharge and “low power” warning. I’m not saying you can’t mix batteries – it’s just not 100% safe to do so. It all depends on how much you love your good looks, and how much you trust Chinese manufacturing, I suppose.

The GX2/4 has more appeal for me as a dual-18650 kit. Adding more batteries to the mix doesn’t increase real estate – any tank up to 25 mm fits without overhang in either “mission mode”. That will be enough for many people. But if you wanted to upscale, you’re out of luck. It’s kinda odd – increasing battery lug without adding significant value.

That larger battery door is a problem too. The hinge/button release is fiddly to open and close. When assembled, the top of the battery extension isn’t flush with the mod. The button release adds a slight wobble. And on one sample, the battery door jammed and wouldn’t open. Forcing it open, the latch pulled the battery housing out of place and now the mod doesn’t power on.

Hopefully these are just beta issues and will be resolved by SMOK.