The Vapefly Galaxies is an affordable 22 mm mouth-to-lung rebuildable dripping atomizer. Affordable MTL RDAs are not as common as some of us would wish nowadays. In fact, the Galaxies along with the recently released Berserker RDA are the only two worthwhile budget-friendly MTL RDAs to enter the market lately. The RDA itself came clean with no weird machine oil smells and the such. I took it out for a quick rinse and I was good to go. I received the stainless-steel edition which comes with a black Delrin top and an Ultem mouthpiece. Three colors on my dripper were too much for me so I immediately replaced the included mouthpiece with the black one from my Berserker Mini RTA.

The build deck features two posts, a negative stainless steel, and a positive gold plated one. Don’t let the two screws on each post confuse you, this is a single-coil only RDA with the second screw being there for airflow adjustment (more on that later). Props to Vapefly for also including cut-outs on each side for placing your coil tool, a feature I always appreciate.

The air will then be channeled through a slightly angled single hole on each side of the RDA, placed just under your coil. On top of that, each of the two posts of the RDAs build deck features an airflow adjustment screw, letting you reduce the airflow even more. In my opinion, this RDA is made for squonking. Dripping through the mouthpiece is not practical and removing the top cap to drip will soon become a chore, especially with the airflow having to be set in its exact place every time. But, when built accordingly, it performs as a squonking MTL RDA should.

The Vapefly Galaxies is a solid MTL RDA. It doesn’t come without its flaws, with the fiddly nature of the deck and the slightly confusing airflow adjustment options being the most notable ones. But once you manage to work around these minor inconveniences you will get a very satisfying MTL vape that you can adjust to your preferences. 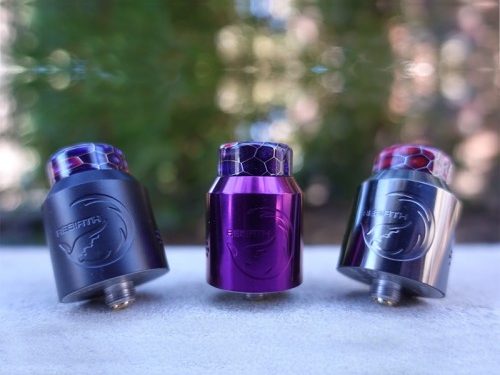 Rebirth RDA – another highlight from HellVape